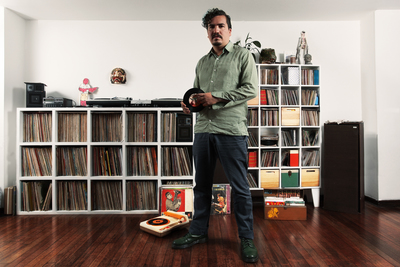 Mario Galeano Toro is a Colombian musician, composer and producer, recognized for being a spearhead in the new periphery cumbia movement, after dedicating more than 15 years to experimenting and investigating Latin American cumbia, as well as creating an electronic and avant-garde sound. Being one of the most influential musicians when it comes to Latin American culture, he leads cult projects such as Los Pirañas, Ondatrópica and Frente Cumbiero. Along with this wide catalogue, he has put cumbia in the global music map, and has effectively removed it from the antique shops, while at the same time condensing everything in another performance under artistic name Gala Galeano (DJ Set).

Galeano’s tropical journey starts in the nineties, when along with his running mates Eblis Álvarez (Meridian Brothers, Los Pirañas) and Pedro Ojeda (Romperayo, Frente Cumbiero), he founded Ensamble Polifónico Vallenato: a noisy and dissonant experimental vallenato format. After returning from his scholar studies in the Netherlands in 2010, Mario founded one of the most acclaimed projects in Latin American neo-cumbia: Frente Cumbiero, which debuted with its eponymous LP, and included contributions from dub pioneer Mad Professor. Two years later, Los Pirañas released their debut Toma tu Jabón Kapax, and right after that, Mario carried out his most ambitious and visionary project yet: Ondatropica. Along with British musician, DJ and producer Will Holland (a.k.a. Quantic), Galeano put numerous musicians together, both from the contemporary Latin American scene, as well as legendary ones from Discos Fuentes’ 60s and 70s catalogue. The result was an orchestral and polysonic experience, comprised of nearly 145 musicians which included Alfredo Linares, Adolfo Castro, Michi Sarmiento, Fruko, Pedro Ojeda, Eblis Álvarez, Nidia Góngora, Quantic, and many others. To quote Cumbia’s Commander, Ondatrópica is a “live document of what tropical Colombian music is”.

Mario Galeano’s career as a producer includes contributions in releases from Chile’s Juana Fe (2016), Rolling Ruanas de Colombia (2017) and Jorge Drexler’s acclaimed Bailar en la Cueva, which was awarded a Latin Grammy for best production in 2014. Besides that, Galeano has also composed pieces for Kronos Quartet (2017), one of the most acclaimed chamber ensembles in the world.

Loyal to vinyl culture, Galeano’s music is highly marked by analog production and pressing, and he has worked with labels such as Soundway Records (UK) and Names You Can Trust (US).

After a career which has been deeply compromised with neocumbia’s avant-garde movement, Galeano’s tropical psychedelia in his DJ Set format has taken transnational guacharaca’s format electronic mantra to the stage of events such as Sónar (in its Bogotá, Santiago and Buenos Aires editions) and Boiler Room Bogotá, experimenting with the triangulation of indigenous, black and white elements in every bit, creating delicious mestizo power on the dancefloor.

"At 35 years of age (Mario Galeano), this Colombian musician and producer did what no other Latin American artist had been able to accomplish: getting tradition closer to the intrinsic fields of the international avant-garde”