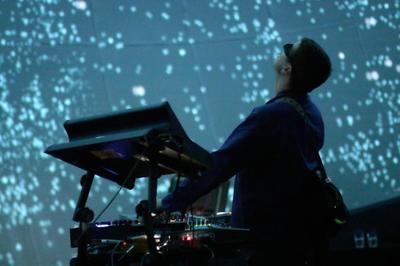 El Leopardo is an exciting new contribution driven by legendary Colombian producer/DJ Daniel Broderick a.k.a Dani Boom.  With a debut EP released on 12” on Glitterbeat, support from Gilles Peterson on BBC Radio 6, and a slot at Transmusicales festival (as part of their Dec tour in France and Denmark) things are hotting up quickly.

Dani Boom is more widely known for his revolutionary production work mixing traditional Colombian sounds with techno, hip-hop and break-beat for Systema Solar (one of Colombia’s most explosive live acts he co-founded).

El Leopardo mesh urban dub textures with big rolling bass and Colombian percussion. It's deep and profound techno with the essence of Colombian rituals and mantras from the jungle.

El Leopardo made their live debut at Sónar Festival Bogotá on the RBMA stage, and with the help of the Exploring City Sounds project commanded by RBMA, the project contributed with Dengue Dengue Dengue at their studio. They were also invited by Colombia’s biggest electro-tropical act, Bomba Estéreo, to perform for about 4000 people at their Caribbean beach festival (Estéreo Beach).  A few sold out headline shows in Bogotá later, and El Leopardo cemented their reputation as one of the most exciting new acts to emerge from Colombia. Without a doubt, this opened lots of doors for the project to showcase its talent on some of the world’s best stages, such as Roskilde 2018 (Denmark) and Fusion 2018 (Germany).

With just their debut EP released so far and more music on the way, lots of anticipation is building for this feline to be let off the leash.

“their single, ‘El Leopardo’, features deep, propulsive bass, pounding percussion, and echoing, chanted vocals, marking it out as one of the most exciting songs to come out of Bogotá this year“ - The Culture Trip

“It could sound like a weird concept, and maybe to some people it sounds like something that shouldn’t work – but the truth is that Latin music and techno have a lot in common.” - Mixmag