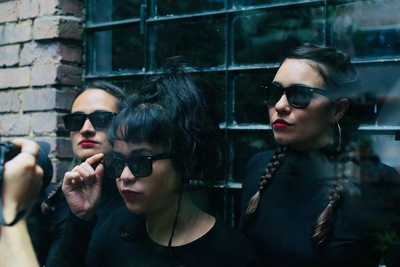 La Perla is a trio of researchers, singers and instrumentalists focused on the traditional musical heritage of the Colombian caribbean. Karen, Giovanna and Diana began playing in 2014 after years of individual experience in the interpretation of gaitas, hand-drums and folk singing.

In 2015 they won first prize at the Festival de Gaitas de Ovejas, a legendary Gaita contest-festival in Sucre, Colombia that had never been awarded to a band from Bogotá and was being awarded for the second time in their over 30 years of history to female artists. Two years later they began touring outside their country with a first visit to Mexico and eventually to Chile, the US and Europe where they have continued to visit with their powerful lie show.

They have released an EP and several singles with the independent label Mambonegro Records run by producer Daniel Michel. "Bruja" from 2018 has become a hymn for all women in Latin-American appearing on the Netflix show "Siempre Bruja" and by being adopted on the streets at the different social uprisings in Spain, Colombia and Chile. They are currenty in the studio preparing what will be their awaited debut LP.