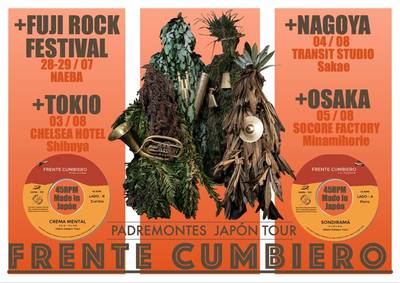 As the highlight of an unforgettable year in Frente Cumbiero’s career, this weekend marked the beginning of the Mario Galeano-led quartet’s long awaited Asian tour. The tour’s opening came through a series of memorable shows at Naeba’s iconic Fuji Rock Festival, where both the band and Galeano in his DJ Set format, took over the Crystal Palace Tent, accompanied by a fantatic line-up, which included phenomenal artists such as Bob Dylan, Kendrick Lamar, Johnny Marr, N.E.R.D., as well as the tasty chirimía of fellow Colombian band Rancho Aparte.

After a weekend to remember, these are the upcoming stops in the band’s journey through the Far East:

Chelsea Hotel Shibuya (Tokyo): The Japanese version of the iconic Chelsea Hotel will receive the guacharaca-infused anthems of Galeano and company on Friday, August the 3rd. The event will also include the presence of Swedish DJ Rickard Masip, who has built a great reputation in the Japanese scene thanks to the work of Tokyo Sabroso collective. Masip is also widely recognized for having an extensive and select collection full of dub, afro funk, calypso, and all kinds of sonic jewels to encourage unbridled dance.

Transit Studio Sakae (Nagoya): Located in the heart of Nagoya, the Sakae Transit Studio will be the next opportunity for the band to present its classic catalog, as well as a couple of unprecedented surprises to the Japanese public. The concert will take place next August 4th.

Socore Factory (Osaka): The last stop of the quartet will come at the expense of Hoofit, a local party which, in addition to the sensational live set of Frente Cumbiero, included a good share of local talent in its lineup, featuring acts such as Teruya, amanita, and resident DJs (Kazikiyo from Root Down Records, Questa from BMS and DY from sucreamgoodman and BMS).

It is worth mentioning that the tour is just the first phase in an extensive stage of shows throughout the world, which will be accompanied by the release of unpublished material, as well as the reissue of the iconic Frente Cumbiero Meets Mad Professor, released in 2011.