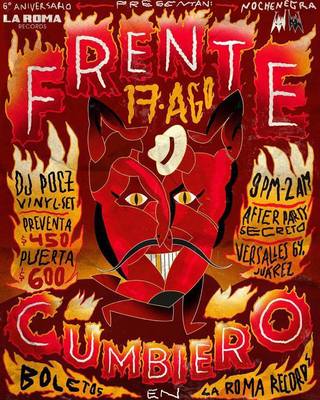 After a fantastic tour through Japanese lands, Frente Cumbiero’s guacharaca crossing throughout the world doesn’t stop. In mid-August, the taste and enjoyment of Mario Galeano and Co. will land in Mexico City, on the occasion of the sixth year of life of our dear colleagues from La Roma Records.

The party will take place in Versailles 64, and in addition to the presence of Frente Cumbiero as the night’s headliner, the blast will also be orchestrated by the Afro-Latin rhythms and grooves of DJ Pocz: producer and vinyl digger native from Venezuela and based in CDMX.

While the doors of the event will close at around 2AM, the entrance also guarantees a prodigious secret after-party starring Rob Sevier: co-founder of Numero Group label, based in Chicago and which, has been doing a judicious work of research and sound excavation for a little over 15 years, in order to re-edit and collect hundreds of invaluable jewels from the twentieth-century American scene, which have become highly susceptible to being forgotten by the public over time.