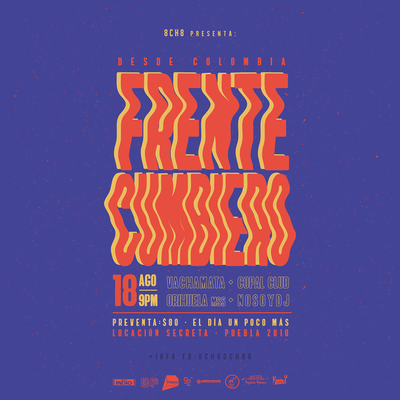 Just a day after participating in the highly anticipated anniversary of La Roma Records in Mexico City, Frente Cumbiero arrives in Puebla to light up the night with the sound of ChucuSteady, CumbiEtiope, and the characteristic flavor of its most recent release, Padremontes. The event, which will be produced by 8ch8, will also feature the most select talent from the tropical scene of Puebla, with artists such as Vachamata, Copal Club, NoSoyDJ (founder of 8ch8) and Orihuela M S S.

Tickets can be obtained in Puebla Centro, 4 Oriente 403 (El Venado and Zanate) and Casa Nueve, Calle 2 Norte # 1205-a San Andrés Cholula. They have a cost of barely 80 Mexican pesos in the pre-sale, and a little more on the day of the event.

More info about this event here.