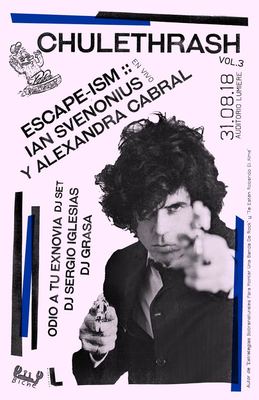 It is a real pleasure to announce the anticipated return of Chulethrash: our cycle of punk and cumbia, which has put our greasy and adored friend "Chuletín" in the spotlight. During the first two successful editions of the event, we brought tasty references from the local and Ibero-American scene such as Los Nastys (Spain), Sonido Confirmación (Mexico), Frente Cumbiero and Compadres Recerdos. 2018 brings a new edition, and the frantic chuleta ritual is returning more loaded than ever. For this occasion, on August 31 at Auditorio Lumiere, our master of ceremonies will be Ian Svenonius, one of the most eccentric icons of the American underground, author of the satirical and revealing bestseller "Supernatural Strategies for Making a Rock n’ Roll Group". Mr. Svenonius arrives for the first time in Colombia in the midst of Rock al Parque’s academic cycle (check out more info about the workshop here), hand in hand with this book, as well as his noisy and minimalist experimental show, known as Escape-ism.

Called "the most interesting man in rock today" by the Washington Post, Ian jumped to the public sphere in the late 80s thanks to his band Nation of Ulysses, which became a spearhead of the punk scene and Washington DC's harcdcore. Later on this gave life to The Make-Up: a powerful hybrid of garage noise, soul and what he called "Gospel Ye-Ye": an aesthetic proposal with elements of bubblegum, pamphleteer propaganda and an extravagant performance inspired by the so-called " liberation theology. " His most recent project, Escape-ism, will be the main course enjoyed by diners attending volume 3 of Chulethrash on August 31; along with other dishes that will make you suck your elbow, such as the band Odio a tu Exnovia, DJ Grasa, and renowned Dj Sergio Iglesias. Also. Don’t forget that in addition to "Supernatural Strategies for Riding a Rock Group" (Blackie Books, 2014), Ian also wrote the challenging "Censorship Now" (Consortium Books, 2017). See you at Lumiere!