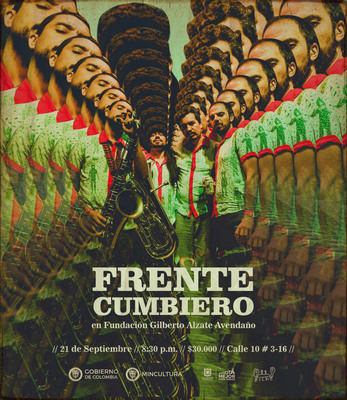 After a remarkable summer, and as a prelude to a tour in which they’ll be deploying all their talent in important stages such as Keroxen (Tenerife), the University of Santiago de Chile, as well as venues in Denmark, Argentina and Italy, Frente Cumbiero returns to Bogotá to play in the auditorium of Fundación Gilberto Alzate Avendaño (FUGA) on Friday, September 21, as a prelude to their participation in WOMEX 2018’s showcases in Las Palmas de Gran Canaria, Spain. The concert arrives after the successful tours that the band did in Japan and Mexico back in July and August of this year.

With a broad and successful career that includes live performances at the MoMA in New York (2011), Estéreo Picnic (2011), Roskilde (2011), Womad (2014) and Fuji Rock (2018), Frente Cumbiero has become one of the greatest champions in the exploration of the sonic identity that cumbia represents for Latin America. Commanded by Colombian composer and producer Mario Galeano Toro (also co-founder of Ondatrópica and Los Pirañas), the project has established itself as a spearhead for the new cumbia movement in Colombia. After a phase as an electronic act composed exclusively by Galeano, which brought along important performances in stages such as Boiler Room Bogotá, Sónar Bogotá, Santiago and Buenos Aires, the Cumbiero Front has returned to its traditional quartet format, concentrating on the most powerful hits and dance of the tropical sound, through its particular combination of 2 winds, live percussion and electronic sounds / dubbed sequences.

Back in July, the quartet was part of legendary Japanese Festival Fuji Rock, and they embarked on a tour of Japanese territories after the release of Padremontes: an unprecedented and powerful duo of songs released and distributed in a 7-inch vinyl format, thanks to Tokyo Sabroso collective and its label Okra. All of the above guaranteed the project’s selection in WOMEX 2018, which is undoubtedly one of the most competed and desired fairs by artists throughout the entire world.

Active for more than a decade, and going far beyond the concept of cumbia as fashion, Frente Cumbiero is a true follower and guardian of the guacharaca calling. After the huge success of the band’s debut album Frente Cumbiero Meets Mad Professor (2011), Galeano and company are ready to launch their next and long-awaited LP, and without a doubt the concert at FUGA will be the perfect prelude for the Colombian audience to share a nice time of new music, dance and enjoyment.