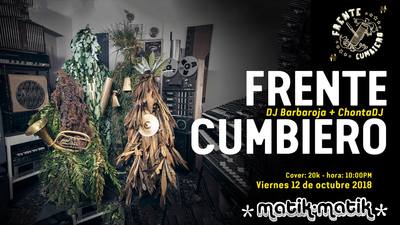 Just a few days before leaving for European territories, Frente Cumbiero will conspire in favor of its fans to give them a new opportunity to witness their powerful guacharaca discharge, which has already captivated people from all ages around the globe. And here’s the best of it all: the event will also feature a deluxe musical selection, thanks to Barbaroja and Chonta DJ.

The event arrives right after the release of the amazing boxset printed a couple of weeks ago by our friends over at La Roma Records, as a way to celebrate ten years since the brilliant Frente Cumbiero Meets Mad Professor was recorded. It’s a collection of five 7 inche records, which includes the unreleased "Guachaca Dub", recorded during the sessions of the iconic LP. More info on this cute coven here.