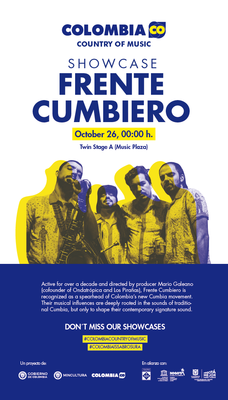 In addition to the well-deserved showcase that Frente Cumbiero will offer as part of the WOMEX 2018’s Official Selection on October 26, the quartet will embark on a new journey in which they will bring all the tropical power to important stages in Spain, Denmark and Italy:

Oct 18: With a DJ set in the Italian town of Ariano Irpino, the kings of cumbiero flavor will give its fans a fresh start to this new phase of the 2018 world tour, which already crossed Japan and Mexico during the months of July and August.

Oct 19: Second show in Italy. The appointment will take place in Rome’s Acrobax room, and this time around the project will uncover, as it should, its traditional and globally acclaimed quartet format. More info

Oct 24: Frente Cumbiero’s Spanish journey begins. Thanks to the joint effort of Xtarradio and Open Music, the quartet will start its pilgrimage in the Iberian Peninsula setting a night full of dance and enjoyment in Sidecar (Barcelona). More info

Oct 25: Night of Colombian heavyweights in Madrid’s BUT room. With the help of Charco and Guacamayo Tropical, the Spanish capital is getting ready to host Frente Cumbiero and Systema Solar: an unparalleled combo of new stars in tropical music, which promises to give Madrid’s audience "a galactic evening with the best dance payroll on planet Earth". The event will also host members of Guacamayo’s select DJ catalogue. More info

Oct 26: WOMEX, Gran Canaria. As usual every year, Europe will host the World Music Expo (WOMEX) during the month of October. This year, the massive exhibition will be held in Gran Canaria (Spain), and it incidentally brings us very gratifying news: Frente Cumbiero is part of the select showcase lineup that will be exhibited at WOMEX 2018. Within the first round (of six) of announced shows, artists such as Uji (Argentina), Ladama (Venezuela, Brazil, USA and Colombia) Guiss Guiss Bou Bess (France / Senegal), and another 13 projects from all over the planet will also take part in the fair. More info

Oct 27: Keroxen, Tenerife. With a supremely eclectic lineup, Keroxen has established itself in the Spanish festival circuit, as an open oasis for lovers of experimental sounds. The second date of the festival will be held on Saturday 27, and in addition to dancing to the rhythm of "Chucusteady", "Ariwacumbé" and other pieces in Frente Cumbiero’s danceable cannon, festival attendees will be delighted with artists such as Akkan, Filho Da Mae and Usted. Also, this powerful cycle of concerts will host fantastic up-and-coming members of the global scene such as Boogarins, Mouse on Mars, among others. More info