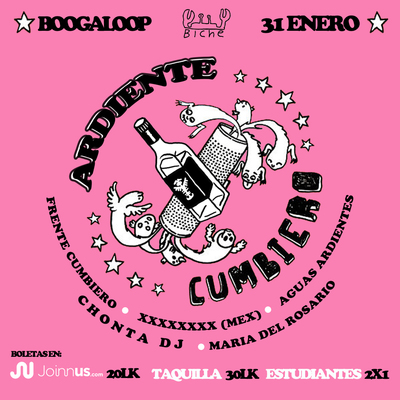 Frente Cumbiero and Aguas Ardientes join forces for the first time to receive the chinese New Year with all its might. The first, an emblematic band from the tropi-under that has carried the flag of the guacharaca calling for over a decade. The latter, one of Bogota´s most authentic, wittiest and fun new bands. They will joined by killer new cumbia band from Mexico City, soon to be announced. On the decks we will have two resident vinyl selectors: María del Rosario and ChontaDJ.

Tickets through Joinnus. This event is produced by Biche.