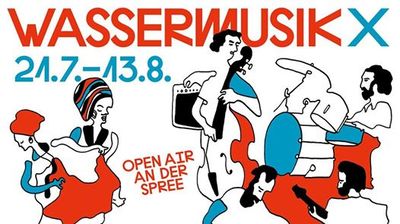 Bixiga 70
Transcontinental connections: Bixiga 70 originate from the international district of São Paulo of the same name, home to the local Samba. Not without reason the group named itself in the tradition of Fela Kuti’s legendary band Africa 70: Their music looks for African roots in Brazilian music— discovering illuminating connections to Kuti’s Afrobeat in the process. This sound is enriched with Blaxploitation Funk, Caribbean influences, and a brass section with at least as much power as that of their legendary role models.

Los Pirañas
Summit meeting of South America’s new oddballs: Over recent years Eblis Álvarez, Mario Galeano, and Pedro Ojeda have effectively reinvented Colombia’s alternative music. Whether solo or in bands such as the Meridian Brothers, Frente Cumbiero, or Romperayo (see July 21)—they wed traditional genres such as Cumbia and Vallenato with Surf Rock, out-of-control computers, and improvisations to create dazzling psychedelic cocktails. On the stage the trio regularly drag audiences on a journey through the undergrowth of South America’s sound rainforest.