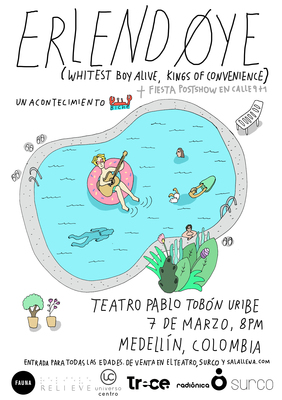 Erlend Øye, founder of Kings of Convenience and The Whitest Boy Alive, returns to Colombia accompanied by 2 Italian musicians from his band The Rainbows, to perform at the Teatro Pablo Tobón Uribe, after releasing his album Legao as a soloist in 2014 .

This concert will be his only presentation in Colombia and his first one in Medellín, in which he will perform songs from his solo project and some from his two beloved bands.

PRE-SALE starting on Wednesday, January 24 at the theater, Surco Records (Medellín) and www.salallena.com. Only 150 tickets available in presale.

Concert at Teatro Pablo Tobón Uribe: suitable for all ages.

Post-show party on Calle 9 + 1: entry valid with the stub from Erlend's concert. Only suitable for adults.