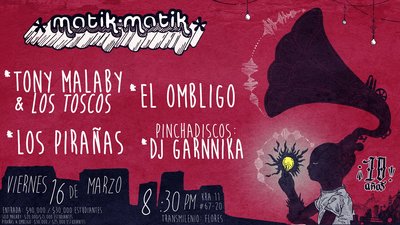 As a part of iconic venue Matik Matik (Carrera 11 #67-20)’s mega-celebration around its 10 years of existence, conceived as a series of parties and concerts across a span of six weeks, Los Pirañas are back on track, while facing a year full of novelty and surprises for their fans, along a very exclusive group of artists who are close Friends with Matik’s family:

"Led by Bogotá based double bassist Santiago Botero, El Ombligo takes the risk of joining the bridges between cumbia, vallenato sabanero, free jazz and improvisation. On a variable format, this fervent group has a debate between Ornette Coleman’s expressionism and the cadenced and nostalgic phrasing of Andrés Landero’s music. This concert will include the band’s more powerful versión with Ricardo Gallo, Pedro Ojeda and Kike Mendoza."

"Diego Garnica, better known as Deejay GarnNika, was diagnosed by experts as a terminal addict of global tropical sonic atmospheres. His avidity for Colombian folklore genres such as cumbia, champeta, terapia and salsa is persistent. He has infected many of his loved ones in many of Bogotá’s nocturnal venues with his “Pura Crema of Tropical Psychedelia."​