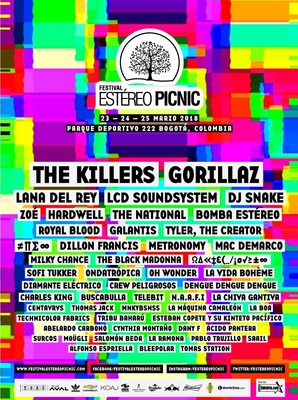 Our beloved Godfather of Champeta and caribbean psychedelia Abelardo Carbonó and his Band, will be in charge of kicking off the last day of Festival Estéreo Picnic, which reaches its ninth version with an impressive lineup which includes huge names in the global scene such as Gorillaz, LCD Soundsystem, The Killers, Lana del Rey, as well as some of the most select names in the national scene such as Ondatrópica, La BOA, Cynthia Montaño, Tribu Baharú, among many many others. Estéreo Picnic will also be the perfect way to start Abelardo’s upcoming tour, which includes important dates in France and Mexico.

The show is scheduled for 14:30 in the Tigo Music Stage: the biggest one of the three stages in the festival, which will harbor shows from bands such as Royal Blood, Zoé, as well as the awaited closure with LCD Soundsystem.

More info about the event here.