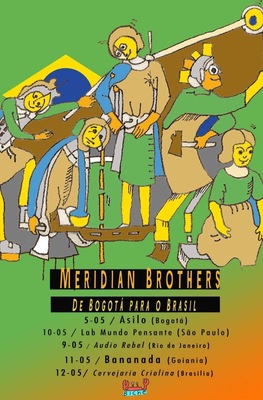 During their 11 years of disruptive, abstract and captivating sounds, and after conquering European tours on multiple occasions, Meridian Brothers arrive in Brazil to present their latest LP ¿Dónde estás María ?. After an electrifying performance at Asilo on May 5 along with Chúpame el Dedo and Barbaroja, the first stop of this tour through the Amazonian country will take place at Audio Rebel: one of the most important carioca epicentres for alternative music.

After their first show in Rio de Janeiro on Wednesday the 9th, our beloved Meridian Brothers arrive at Lab Mundo Pensante in Sao Paulo on May 10, to offer a beautiful show accompanied by the incredible voice of Ava Rocha. Right after that, the band will make an appearance in the 20th edition of Goiânia’s Festival Bananada, which will feature a massive lineup commanded by Gilberto Gil (who will present a special show in honor of the 40th anniversary of Refavela) and Nação Zumbi, plus numerous other fantastic contemporary South American projects such as Boogarins, Francisco el Hombre, Ava Rocha and Javiera Mena. As a closing note for this extensive journey through Brazilian lands, the band will offer a presentation at Cervejaria Criolina in Brasilia on May 12, along with Lucas Estrela, who has become one of the biggest promises of Brazilian music today thanks to his self-described sound of "Tecnoguitarrada".