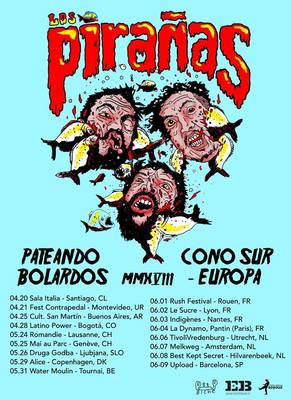 During the last days of May and the first part of June, Los Pirañas return to Europe to present the second round of shows of their Pateando Bolardos 2018 tour. With 13 dates in total throughout Switzerland, Slovenia, Denmark, Belgium, France ,  The Netherlands and Spain, the three-piece of Mario Galeano, Eblis Álvarez and Pedro Ojeda will conquer Europe once again, as a prelude to what would be the expected launch of  the sequel for La Diversión que Hace Falta en mi País (2015).

Within the tour, there will be some important shows such as such as Druga Godba (Ljubjana, Slovenia - May 26) and Best Kept Secret (Hilvarenbeek, Holland - June 8) , which are key dates for the European spring / summer circuit. Along with Los Pirañas, these two festivals will also include great artists such as LCD Soundsystem, Arctic Monkeys, The National, Deerhunter, Ty Segall & the Freedom Band, Ibeyi, Fumaça Preta, and many other widely featured projects from the global alternative music scene. In addition to this couple of festivals (as well as Switzerland’s Mai Au Parc and Rush Festival in Paris), the trio’s tropical noise noise will take over important venues such as Le Romandie (Lausanne, Switzerland), Melkweg (Amsterdam, The Netherlands) , Alice (Copenhagen, Denmark), Water Moulin (Tournai, Belgium), Upload (Barcelona, ​​Spain), Le Sucre (Lyon, France), Indigènes (Nantes, France), La Dynamo (Paris, France), and TivoliVredenburg (Utrecht, The Netherlands ).

To get more info about each one of these shows, you can do it in this link.