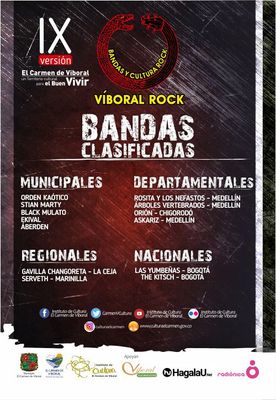 For more than ten years, the Cultural Institute of the municipality of El Carmen de Viboral (Antioquia) has solidified Festival Viboral Rock as one of the most important musical epicenters in the east of Antioquia. Throughout its 8 editions, some of the most important bands of the local scene (Estados Alterados, La Derecha, 1280 Almas, among others) have included the festival in the midst of their tours, making it a desired show for emerging bands from the country’s rock and metal scenes. The festival’s 2018 version, will include the raw and dancy tunes from our favorite garage trio, The Kitsch. The concert, which arrives as a preview of what will be the band’s next release, will be held next Friday June 1 in the main square of the town. In addition, great national artists such as Aterciopelados, LosPetitFellas, Las Yumbeñas and Rosita y los Nefastos will also perform in the festival.

More info about this festival here.