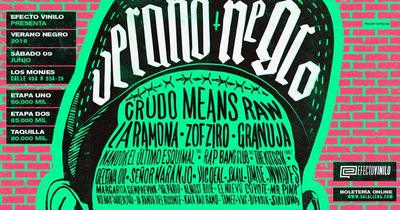 Next Sunday, June 10, Medellín is getting ready for the first edition of Verano Negro: an urban and fraternal celebration organized by the creative studio Efecto Vinilo, which seeks to create a bridge between rock and hip hop: two genres that undoubtedly, have been enormous protagonists of the contemporary musical history in Antioquia. In its first version, the event will feature a premium national line-up, which includes great figures from the paisa underground such as Crudo Means Raw, ZofZiro, Granuja, SAAIL, among others. The festival also includes an interesting Bogota delegation among which stand out Nanook, el Último Esquimal, Rap Bang Club, and of course, the delicious and mordacious garage sound of The Kitsch.  The event will be held on June 10 at Los Monjes (Calle 49A # 55A-20). Tickets are on sale in salallena.com, and they cost 50K on the first pre-sale, 65K in the second, and 80K in the box office of the event. More info on this great party here.