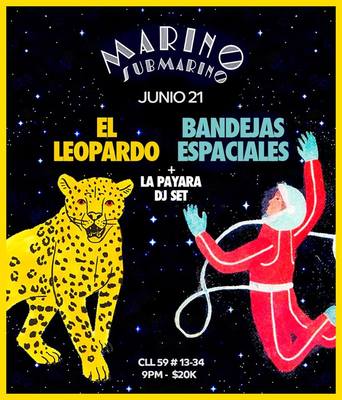 In order to give the best possible start to the holiday/World Cup season, next Thursday, the 21st,  we will put together a trident of the best summery sound in the capital: El Leopardo, Bandejas Espaciales, and La Payara DJ Set.

El Leopardo, the band led by Daniel Broderick, a.k.a. Dani Boom (Systema Solar), promises to immerse us in an exploration of the most exquisite Colombian rhythms, guided by an enveloping journey around the sound routes of cumbia and porro. A night of sonic landscapes with high tide flavors and electronic mantras, which will also be the perfect appetizer for the extensive tour that Broderick and Co. will embark on in July, and which includes important dates of the European circuit such as Fusion (Germany ) and Roskilde (Denmark). In addition to the seismic bits of El Leopardo, the event also includes the psychoactive chaos of Bandejas Espaciales (an ensemble derived from the exquisit family of projects close to the BOA/BOA Fest collective), as well as the electro-psychedelic power of La Payara. More info on this great party here.