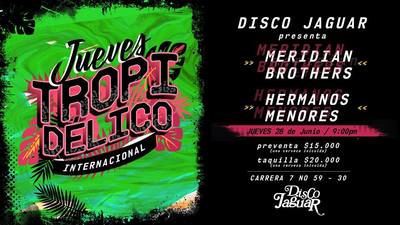 As part of Disco Jaguar’s Jueves Tropidélico Internacional cycle, on June the 28th we’ll witness an electrifying clash between two generations of experimental labs, turned into sponsors of Bogotá’s scientific verbena and strident pogo.  Meridian Brothers and Hermanos Menores: two communities of engineers of the capital’s noise, separated by several years of life and trajectory, will offer us a tasty pilgrimage through cadences and unconventional sounds, from different perspectives. On the one hand, the psychedelic melodic universe of the Meridian Brothers, highly loaded with salsa, Andean string music, Boogaloo and Jazz, promises to offer us an unprecedented night, in which they’ll demonstrate why they are one of the most desired Colombian projects in the world, backed by an impressive catalog of 11 productions, several of which have been backed up by important labels such as Names You Can Trust and Soundway Records.

On the other hand, the night will be starred by the overwhelming sonic current of Hermanos Menores. This instrumental trio shows an aesthetic discourse that navigates between rurality and urbanity, translated into their first LP, Campoamalia (2017), in which they transition between Noise, Post-rock, Hardcore and Free-Jazz. The anagram of its cadences presents a jigsaw puzzle of cultural phenomena, both alien and proper, with regards to the sound and history of Colombia.  If you do not want to miss this noisy and tasty meeting of generations, take note: the event will be held at 9PM next Thursday, June 28th, at Disco Jaguar (Cra 7 # 59-34).